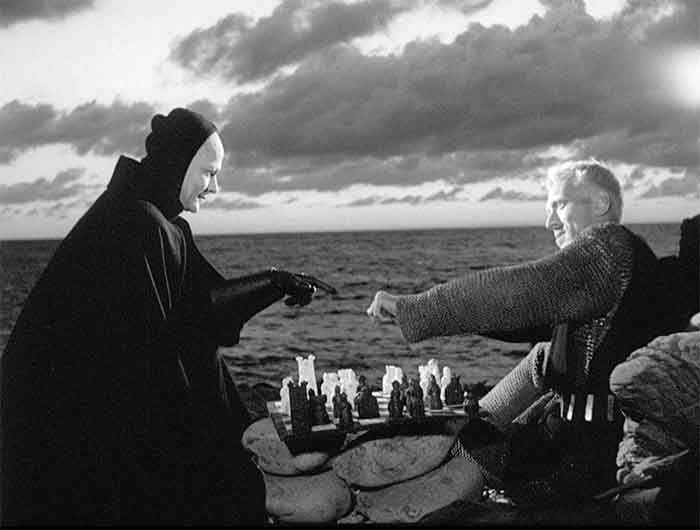 Medieval knight Antonius Block and his esquire are coming home from the Crusades. Both of them are feeling down. As they proceed through the country, they come across trace of the plague. The knight has gone to the Holy Land as a young man full of faith, but has come in the torment of suspicion and vagueness. Can it be that there is no God? This thought proves to be unbearable for him. Still he is interested in life. When Death appears all of a sudden, he proposes Him a game of chess. The knight no longer wants to believe, but he has to know now for certain. In a mass, he discovers that fear is the foundation stone of religion. He witnesses the intolerance, which causes a young girl accused of witchcraft to be burnt at the stake. He accidentally discovers the real solution. An acrobat couple named Jof and Mia remind him that the solution lies in joy of life. Happiness is hidden in the simple pleasures of life. When they reach the knight’s castle with a group of people they have met on the road, his wife calls everyone to supper. But Death finds them there again. While the knight and his entourage are defeated only the acrobat couple escape the Last Judgement. Ingmar Bergman has borrowed the idea for The Seventh Seal from the themes of the Swedish church paintings of the Middle Ages: Travelling players, the plague, burning of witches, and the Crusades. Still the film is not made with a view to describe the Sweden of the Middle Ages and a modern poem instead. From the viewpoint of a small boy, mass is something for the adults. The priest preaches at the pulpit, his flock pray and sing masses. As for me, I would concentrate on the Middle Age paintings on the ceiling and walls of the church. In them was everything the imagination would wish for: angels, saints, dragons, devils, people… Artista of the Middle Ages had painted these with a great sensibility, talent and joy. This had an enormous effect on me. The world on these walls became as real for me as the daily life with one’s father, mother, brothers and sisters. I aimed to reflect the Middle Ages in the same way, with the same objective interest, the same sensibility and joy as the church painters of the Middle Ages. My characters laugh, cry, moan, are frightened, talk reply, play, feel remorse and ask questions. They were afraid of the plague, the Last Judgement, and a star named Pelim. We fear different things but express them by the same words.