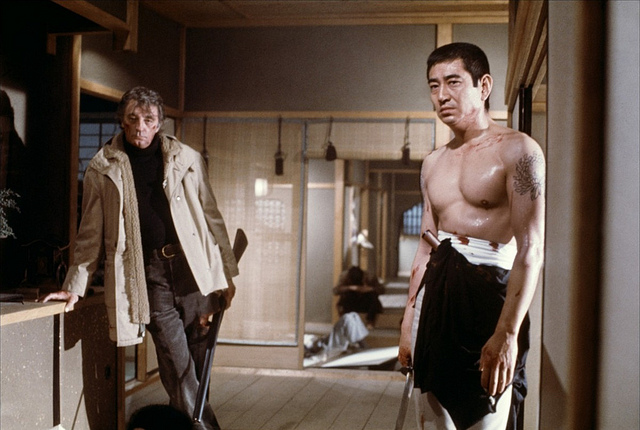 Interesting and well-acted, American take on the Japanese gangster genre. Robert Mitchum stars as a private detective who goes to Japan to rescue an American girl who has been kidnapped by a yakuza, with Japanese screen idol Ken Takakura as a former gangster who helps him in his quest. Kishi Keiko plays a woman with whom Mitchum had had a love affair while stationed in Japan at the end of Word War II, and whom he now re-encounters. Written by Paul Schrader from a story of his brother Leonard, The Yakuza was a commendable attempt to expose American audiences to some of the conventions of Japanese genre films. By making the Ken character an anachronistic yakuza who still lives by the codes of the past (he is described as a “lone wolf” by his brother) while trying to exist in present-day capitalist Japan, the filmmakers were able to interestingly compare ancient rituals and values with more contemporary practices. Director Pollack does a workmanlike job, neither giving added resonance to the material, nor ruining a good idea with overbearing direction. His camera is just there to record the performances and really does little else. The film belongs to the actors, and they succeed in making it fascinating viewing.
USA Japan
'
1975
Director
Sydney Pollack