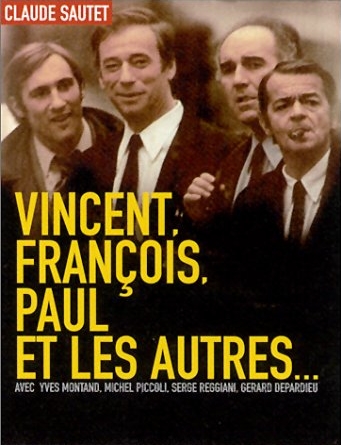 Vincent, François, Paul And The Others

Somewhere between the idealism of youth and the nostalgia of old age lies regret, and it is at this life's juncture that we find three lifelong friends in Claude Sautet's poignant film, Vincent, François, Paul and the Others. Every Sunday, friends and family congregate at Paul and Julia's house in the country, where they leisurely dine, walk through the fields, play sports, and above all, enjoy each other's company. Paul is a writer whose dreams of authoring a literary novel remain elusive, and instead finds himself collaborating on human interest stories. Vincent the owner of a precision machine shop, has mortgaged his business in order to acquire new equipment, and is in danger of bankruptcy. François has a thriving medical practice in the city, and seeks refuge from his troubled marriage to Lucie by immersing himself in his work. Vincent's health begins to fail when he has to sell his business and his wife asks for a divorce, whilst François loses his wife to a younger man. At the core of the film lies he unresolved nature of relationships and it is an astute commentary on the spectrum of human emotion - a profound, yet deceptively lyrical portrait of failed dreams and loves, longing and regret, friendship and loneliness. Yves Montand and Michel Piccoli each offer a moving performance which must surely rate as one of their best. There is also a wistful poignancy in Serge Reggiani's performance. A young Gérard Depardieu completes the ensemble in his first major film role, a very promising début for the actor.
France
'
1974
Director
Claude Sautet