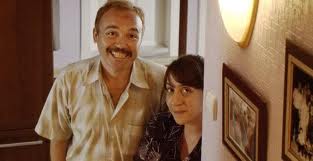 “Time in the small town trickles by at its own habitual pace: the simit seller and corn-on-the-cob seller drift past the store every two hours. As I see it, that’s a pure delight... To all intents and purposes, the provinces are untouched territory. The small town is invariably portrayed as somewhere cold, a place of plodders where no one talks and tractors are forever rumbling past. This isn’t a view I subscribe to, having spent my own childhood in a small town. More familiar to me are the colourfulness of the place and a way of life built on relationships. I look on Anatolia and the small town as fertile ground for black comedy. So a small town in Anatolia was the ideal location for this film. The small towns in black comedies and the small worlds within those towns actually form the nucleus of much larger worlds. In this sense, I chose the small town, thinking I could perhaps access the nucleus of Turkey as a whole. And I took up the life of a nuclear family because it had potential as a portent of the bigger picture. For this reason, I am always drawn to small town films. In fact, my next film will be another small town project.” Engin Günaydın Vavien, the latest film from the Taylan brothers, is an accomplished black comedy, offering a subtle portrayal of the dramas of a small-town family. Written by lead actor Engin Günaydın, the film tells the story of Celal, who is stuck in an unhappy marriage in the provinces, and how his life changes when he hatches a plan to kill his wife.
Turkey
'
2009
Director
Durul Taylan Yagmur Taylan

Festivals
16th Festival on Wheels
A TIME IN THE COUNTRY