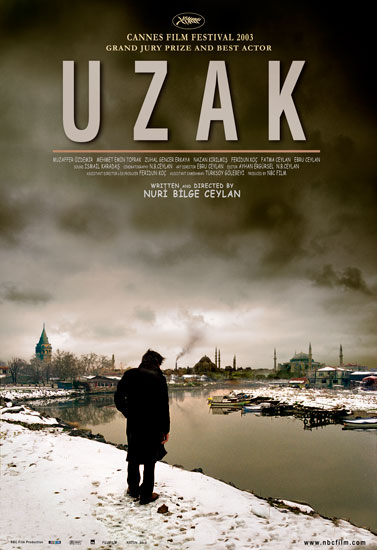 The Pastoral Symphony that Nuri Bilge Ceylan began with The Small Town and continued with Clouds of May now reaches the convolution and clamour of a huge city, Istanbul. The energetic youth whom we got to know in the first two films, with his two failures in University examinations, continuing unemployment and dreams of Istanbul, resumes his quest… He now finds himself as a not entirely welcome guest in the house of an intellectual relative who has managed to establish himself in Istanbul, having exchanged his old problems for new ones… The young man plans to get a job on ships and voyage to other countries, to distant places… Conveying the characters’ interactions within the small flat, Istanbul’s streets, sailors’ pubs etc, with a touching authenticity, Distant is a perfect film in which the viewer can easily identify with both characters. Interlaced with intricate touches like watching porno on video and switching to Tarkovsky to avoid being caught or scenes about the small details of life such as the hunt for the little mouse, Distant is a film that conveys ‘life’ itself. Nuri Bilge Ceylan filters the events through his own memories and our experiences and, in doing so, proves that he could probably manage to communicate any story and the humanity within it, regardless of its setting, be it country, town, metropolis or outer space. It is not often that one comes across a film that seems so ‘distant’ but is so infused with warmth, which appears tranquil but is actually so exciting. Distant contributes much to the Turkish Cinema with its script, dialogue, acting and cinematography. The ‘worst’ and most painful thing about it that it is the ‘last film’ of the leading actor Mehmet Emin Toprak who was lost to us in a car accident last year.. Tunca Aslan