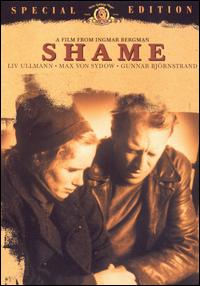 A film which has exerted considerable influence on the work of Andrei Tarkovsky, especially in The Sacrifice, The Shame may be regarded as one of Bergman's most intense films. It refers again to the moral universe which Bergman brings up in every single one of his films but this time his characters face holocaust. A childless middle class couple is confronted with the outbreak of war in the region they live. The panic builds up slowly in the relationship between the man and woman and the devestatingly destructive power of war forces them to look bluntly at the true feelings they have for each other. As they unsuccessfully try to break out of the war zone they are confronted by the frightening outcome of war in a scene that has become a classic in the history of cinema... The whole thing is rendered in a near documentary style, with eerie silences and a virtual absence of music although the main characters are musicians. Its bleakness is further enhanced by the absence of religious questions. In the late 20th Century it seems that god and the devil, so central to the otherwise similar apocalyptic scenario of The Seventh Seal, are irrelevant.Consequently, all the evil in Shame is down to humanity itself. Certainly, this isn't a comforting thought. Shame effectively illustrates the depths to which civilized humans can descend when their comfort is taken away. Both Ullmann and von Sydow do an excellent job of portraying personalities taken to the limits of emotional perseverance.
Sweden
'
1968
Director
Ingmar Bergman