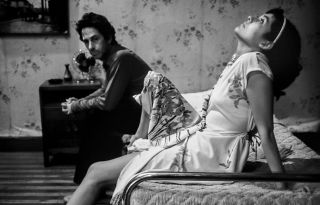 Santiago de Chile, 1978. In the midst of the tough social context of Pinochet’s dictatorship, Raúl Peralta, a man in his fifties, is obsessed with the idea of impersonating Tony Manero, John Travolta’s character in Saturday Night Fever. Raúl leads a small group of dancers regularly performing at a bar located in the outskirts of the city. Every Saturday evening, he unleashes his passion for the film’s music by imitating his idol. His dream of being recognized as a successful showbiz star is about to become a reality when the national television announces a Tony Manero impersonating contest. His urge to reproduce his idol’s likeness drives him to commit a series of crimes and thefts. In the meantime, his dancing partners, who are involved in underground activities against the regime, are persecuted by the government’s secret police. Tony Manero is a story about loss of identity and obsession in the recent Chilean history.