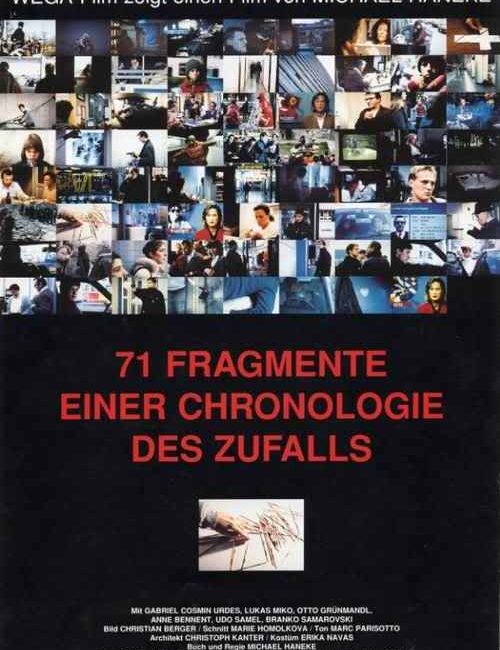 71 Fragments Of A Chronology Of Chance

On the 23rd of November in 1993, a student named Maximilian B. went into a bank in Vienna, killed three people with a gun and then shot himself. The police and media made the youth out to be a psychopath, but still couldn't find out why he did it. What was his motivation? What was that single reason' that would make the people watching the news of the massacre on TV say so that was why? There was not a political motive behind the event. The end result: unknown code. This is an ideal story for Michael Haneke who believes that there is not any simple reason behind acts of violence, but instead a life-style in all its multi-faceted complexity and an erosion of emotions in society. In the film he directed, inspired by this story, Haneke ignores both the life the youth led and his motivations. Instead, during the film, he reflects the lives of the people who were present in the bank on the 23rd of November, since according to Haneke the unknown code is hidden not in the individual world of the murderer, but within the world surrounding him. By looking into the lives of the people who were coincidentally in that bank, he explains far more about that huge ambiguity behind the murder then the quest for a single defining reason' of the police and media. This last installment of Haneke's trilogy is not only the best of the trilogy, but the best in his entire filmography. 71 Fragments of a Chronology of Chance, is not similar to the social problems' film. The situation that is normally attempted to be explained to the viewer during the film, here, is supplied at the end. Haneke tracks the process that leads to the situation. Like a detective who persues the evidence step by step and slowly fits the puzzle-pieces together, Haneke presents via his multi-perspective narrative, 71 segments taken from cold North European life: and portrays the lifestyle that leads to violence. Fırat Yücel
Germany Austria
'
1994
Director
Michael Haneke