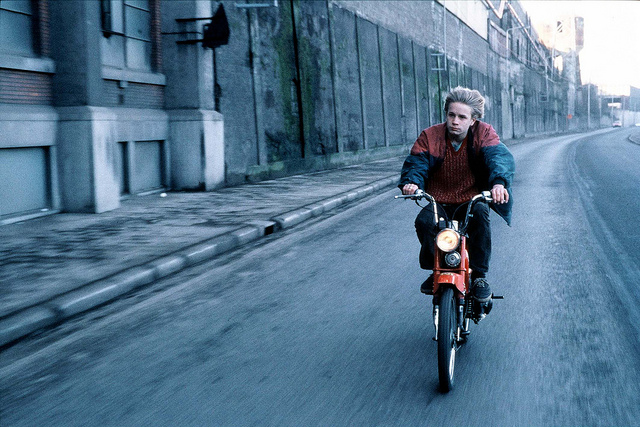 The Dardenne Brothers grew up in a region where poverty and unemployment rates were high; strikes and resistance common-place. This environment influenced first their documentaries on workers and then their features. The realistic and natural stories are shot in long takes and an active camera follows the characters. The Dardenne Brothers, who with their third feature film La Promesse / The Promise, focused on the problems of immigrants living in their country, mainly use unemployment, poverty and immigrants as subjects. The problem of immigration is at such a rate in their country that, while the main subject of their film was unemployment, they named it Rosetta, hinting Italy in subtext to imply their main character was an immigrant. While expressing these subjects, the themes brought forth are betrayal, guilt and people confronting their conscience. At the beginning of The Promise, Igor steals money from a woman’s car in the garage where he works. He is blond and beautiful enough not to be accused of theft. His father, Roger, who is eager to get money by any means, uses his son. Together, they make some money using illegal immigrants. The viewer witnesses the problems of immigrants from Roger and Igor’s point of view. It seems that in a rich country everything is based upon theft and greed. As the Dardenne Brothers are skillful experts of characterization, neither Roger nor Igor can be seen as Classical Villains’. With the accidental death of one of the immigrants from Burkina Faso, Amidou, Roger tries to hide this not even legal death. Igor’s conscience (he promised dying Amidou to look after his wife and child) will clash with his father’s money centered mentality. The Dardenne Brothers’ characters are the kind that one can come across in real life. They carry both good and evil inside. Maybe what makes them evil is life itself and their dreams (such as Roger’s dream of buying a house). If Igor didin’t have a father like Roger, He would have been able to preserve his innocence and heart. S. Ruken Öztürk