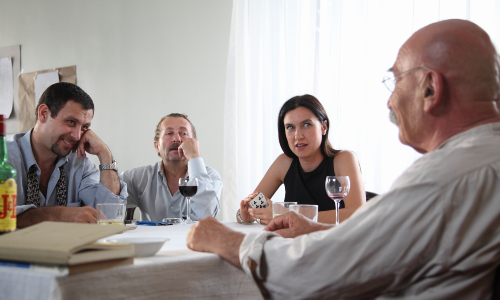 “For me, Black & White is a perennial home. To call it simply a bar would be an injustice. Before me is an unfailingly warm film which makes a strength of its naivety and derives coherence from its own completeness. How many films do you know of where city, location and people are so inextricably interwoven?” Hasan Bülent Kahraman A painter with a turbulent history, fiercely committed to his ideals and still averse to settling down despite his 70 years; a lawyer who packed in his job after suffering a heart attack and now pursues a quiet life looking after his pet snail; a doctor already disenchanted with his profession and now discarded by his wife; a career woman braving life on her own, who has made loneliness a lifestyle. These characters are all patrons of Black & White, an Ankara bar that has been around for 25 years, and in a sense the bar is their last haven. The owner, meanwhile, is the irritable, easily offended but utterly lovable Faruk… Black & White is a film about the awareness of growing old, friendship, sensitivity and the finer details of life.