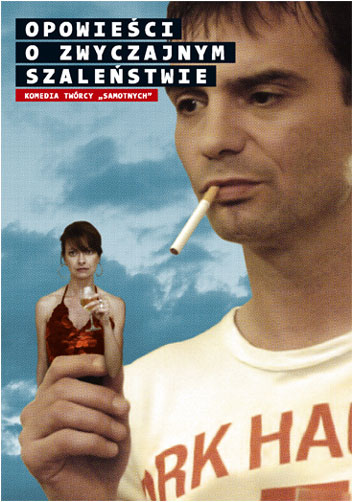 Suppose one day you sensed the blanket on the bed was alive and advancing towards you, would you jump on it and reach for the rope to tie it down? What if the neighbours confided that they couldn’t perform in bed without an audience and paid you to watch, would you tell your lover it was just a job on the side? How would you console a boss who kept a list of items his wife had thrown at him? Within this out-of-the-ordinary world, Petr is dazed and smarting from a bust-up with his girlfriend and taking advice from his friends on how to win her back. Having realised flowers aren’t going to do the job, Petr is persuaded by a mate with a side interest in black magic to sneak into his girlfriend’s bedroom, whip off a tuft of hair and boil it up in water. Unfortunately, he gets the wrong bedroom and the wrong hair. Just as things turn into a spectacular mess, a call from his mother sends him reeling: his father is dying and she wants him home. Anxious to see his father one last time, Petr hurries back to find the situation is nothing like his mother described. His father is doing as he always does: just watching the bubbles in his bottle of beer. His mother, however, takes this for indifference. As far as she is concerned, Petr’s father should have feelings about the war in Bosnia and earthquake in Georgia, and his apathy is a sure sign of imminent death. It isn’t only Petr who inhabits this realm of ‘madness’; the same seems true of everyone around him. He shares his loneliness and experiences of ‘ordinary insanity’ with the mannequins that arrive as cargo. Pushing himself to the limits to get his girlfriend back, Petr not only battles with his own ‘insanity’, but also finds himself up against successive misfortunes. In Wrong Side Up, Petr Zelenka employs a hyperbolic style to tell a series of everyday tales – and maybe, in fact, his own eccentricities. The film suggests that ordinary events unfolding around us may one day strike us as insane, or that every experience
Czech Republic
'
2005
Director
Petr Zelenka