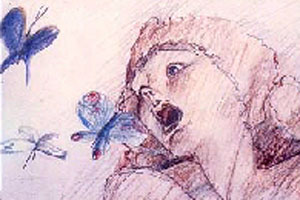 The film is based upon the music of Eric Satie. The fauna of the megalopolis, the jungle of the super-market, the bedlam of brothels and bars, the effects of the bars in fog, the swaying ears of corn, the swaying of men hanging from the gallows, the ripple of water -seen by the eye of the animator in harmony and conflict, accompanied by the satirical, mocking, but sometimes pure lyrical music of Eric Satie.