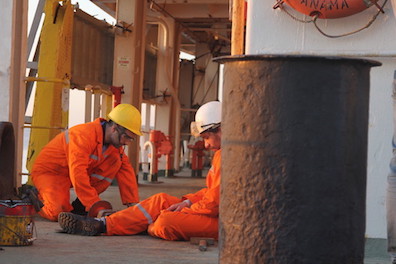 Sarmaşık is aimed to sail to her loading port Egypt to carry goods to Angola. As she is sailing down south the ship owner who was not able to pay salaries to these crew members for quite sometime goes bankrupt. When the ship arrives in Egypt, it becomes clear that the ship owner has not paid for the port fee and that the ship has been foreclosed. Port authority officials pull the ship to the anchorage zone. A team of six people will need to stay on board in case the ship has to be moved: a machinist, an officer, two sailors, a cook, and a master sailor. As their passports are seized, the crew starts to wait on Egyptian shores for an indefinite period of time. They all have different stories, their own reasons to stay away from Istanbul for a while. The crew splits into small groups from the very beginning. Small conflicts grow into big fights as the food and beverage supplies run out and the ship turns into a battlefield where men hunt men.

“This story presented me with the opportunity to consider many things in terms of the authority and individual relations. I came to realize that certain things that apply to the trapped sailors would also apply to all of us. Our captains are becoming more and more conservative, even fascist, but are they aware that the oceans end. The ocean ended; a ship that does not sail is not a ship. If it isn’t the time to ask what the sailors in the story do, will it be the right time tomorrow: ‘What should we do with the captain now?’”