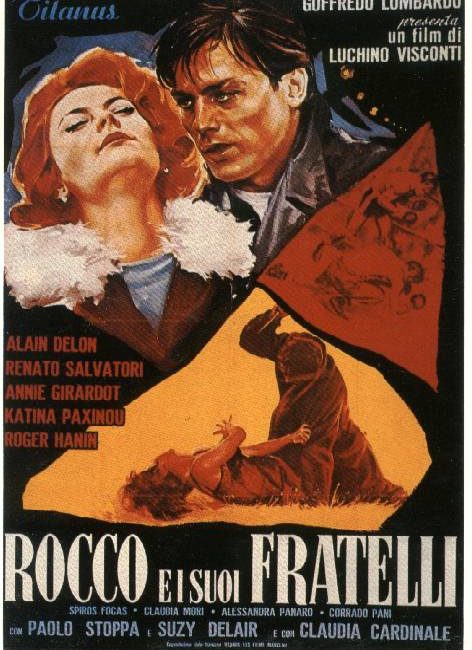 Rocco And His Brothers

Rocco and His Brothers appeared in the same year as Fellini's La dolce vita, and together they indicated, in opposite ways, the major possibilities for the Italian cinema of that decade. As artistically successful as director Visconti's earlier La terra trema (1948) and Senso (1954), Rocco is, however, even more rigorous and has its roots in a larger and richer cultural base (…) Visconti's critical realism takes the form of a study of each member of a Sicilian family of five sons and a mother (some characters receiving more emphasis than others) who have emigrated to the industrial Northern city of Milan. Each character responds to his or her situation in utterly different ways. Visconti thus achieved a complex structure that was to be attempted again by Bertolucci, one of his greatest admirers, in 1900. Originally Visconti conceived of the film as built around the mother, but the final film analysed more closely the two middle sons, Rocco and Simone, both of whom become boxers but have entirely opposite personalities. Simone is fierce and instinctual; Rocco is passive and thoughtful. Rocco sacrifices himself, his love (Anne Girardot's portrayal of Nadia was universally praised), and his dreams, for his brother and his family. The last scene is devoted to Ciro, the son who reaches political awareness, the only member of the family to become truly a part of urban community. Ciro's final speech to his younger brother reveals Visconti's intention to “arrive at social and political conclusions, having taken during the film the road of psychological investigation and faithful reconstruction of a drama. (…) Elaine Mancini
France İtaly
'
1960
Director
Luchino Visconti

Festivals
12th Festival on Wheels
ONE CENTURY WITH VISCONTI