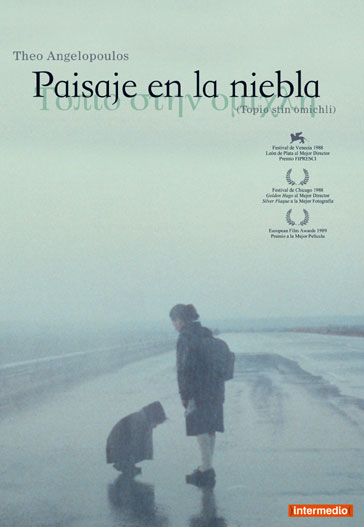 Landscape In The Mist

To say that the Greek filmmaker Theo Angelopoulos is a movie poet doesn’t mean that the poetry isn’t patience-trying or mediocre. In Landscape in the Mist, the director brings his talent for lyrical theatricality to the story of a 14-year-old girl named Voula and her little brother, Alex­ander who embark on a journey to find their father. The children, who have the big-eyed, soulful waifishness of storybook kids, have never met him but their mother, wishing to shield them from their illegitimacy, has told them that he lives in Germany. Soon they climb aboard an express train to the north. But without tickets or money, they are quickly thrown off, starting them on their true odyssey. In terms of genre, “Landscape” is a mytho-poetic road movie. To the extent that its ambiguities can be parsed, it’s about an existential search, a voyage toward the unattainable. In the beginning, before the narrative shifts to dime store surrealism, the urgency of the children’s quest is affecting. As a story of innocents abroad, it has genuine emotional power. Hal Hinson
Fransa İtalya Yunanistan
'
1988
Director
Theo Angelopoulos