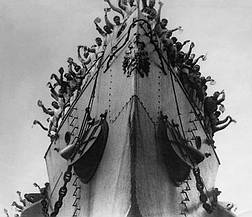 Battleship Potemkin was never a “lost” or “forgotten” film. In 1958, the Cinématheque Royale in Belgium conducted a survey among one hundred experts; most of them film directors, with the result that Potemkin was voted “best film of all time”. At the time, the film existed as a sound version from which a good fifty or so shots were either missing or had been reallocated; the film had also been given a completely new score and included quotes from Lenin at the beginning and in the film’s final commentary. In the Federal Republic of Germany, these texts and all the intertitles were replaced by a text written by Friedrich Luft, who lauded the film’s artistic merits and played down the political aspects of the work. The most successful attempt to date to get close to Eisentein’s original is Sergei Jutkevitsh’s 1976 ‘jubilee version’, which evolved in consultation with Moscow-based Eisenstein specialist Naum Klejiman. In 1986, the Frankfurt Young German Philharmonic Orchestra approached us at the Munich Film Museum asking for a print to which they could perform the Meisel score. Their request led to the first attempt to combine the music composed for the 1926 German version with a print that approached Einenstein’s own concept of the film. And so, here is Potemkin once more. The sequence of shots and titles in the current version follows in particular the version the bfi inherited from the MoMA. This current print can be regarded as a reliable version of the film once shown at the Russian premiere. This new ‘Berlin version’ comprises 1,372 shots 15 more than the previous, hitherto most complete, 1976 sound version. Now, for the first time, the film’s 146 opening titles and intertiles can be seen as they were intended in the original. It was also possible in this print to reinstall the original texts of 13 titles missing from the MoMA print - including the Trotsky motto as well as five reel titles.
Russia
'
1926
Director
Sergei Eisenstein