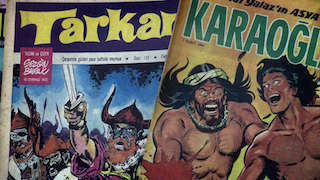 Here is a documentary that turns its attention to the remakes which came to typify the Yeşilçam age of Turkish national cinema in the 1960s and 1970s. Much like today, producers and directors of the period were influenced directly or indirectly by overseas productions. The consequences of this interaction provide the focus of the film, which considers the potential for new twists and turns when an idea borrowed from elsewhere is revamped within a structure of its own. We are, of course, talking about copy culture; but the point is that copying, along with the interaction it implies, is tremendously important as a cultural activity, and indeed that imitation lies at the very heart of creativity. Among the interviewees who make an appearance are “adventure” filmmakers Çetin İnanç and Yılmaz Atadeniz, together with directors Metin Erksan, Halit Refiğ and Duygu Sağıroğlu. Other subjects given mention in the documentary include the television drama industry, the demolition of Istanbul’s iconic Emek Cinema, censorship both at the time and today and the inadequacy of Turkey’s film archives. (…)

If Yeşilçam was competing with Western cinema, it was a futile exercise. In imitating Western cinema it had also to give the audience something of itself. It was, after all, trying to make up for its own inadequacies. Without the resources to produce movies to Hollywood standards, the one distinction Yeşilçam could offer was emotional intensity, and this became the laughing stock for its excess. But to generate this motivation in the conditions of the day, to risk death in dangerous scenes in order to finish the film, to keep up the struggle and endeavor, this all found its way to the audience at the time. And they found something of themselves in those movies.

Festivals
20th Festival on Wheels
For the Love of Cinema!