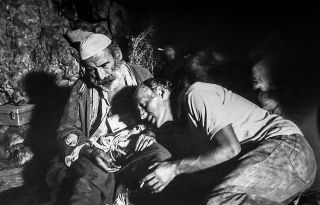 Smile Of The Lamb, The

“All started during the screening of the film ‘The Herd’ in Tel Aviv. In the panel, I talked about the Third World Cinema. We compared the American commercial cinema and aesthetics, Soviet idealist cinema and aesthetics, European bourgeoisie cinema aesthetics and The Third World aesthetics. First Nesim Dayan, film director and critic, said that he wanted to work with me. I played in the film “On a Thin Bridge”. I was invited for the screening in Tel Aviv. There Shimon Dotan wanted to talk to me. He said “I wish you worked with me first” and he started to tell me the story. When it came to the Lion Man, I interrupted and told him the story ‘Ivan and The White Bear’. ‘Ivan was cold, the bear was hungry, they met, the White Bear ate Ivan, the White Bear was satisfied. Ivan was not cold anymore.’ We understood each other. I started to study Arabic. It was very difficult. If I remember right, I was talking Arabic non-stop 45-50 minutes. First it was like memorizing the telephone book. Then I started to get accustomed to. My friends were saying “you will do it” and it was humiliating for me. The director said “If you want, play in English or Turkish”. And one night, early in the morning, I caught the role. When my Arabic teacher arrived, I was feeling free. So, it started like this. It was hard. Under the hot sun, I came closer to this Palestinian saint. He had a son. Yezdi was in the Palestinian Liberation Organization. And his closest friend Dr. Uri was an officer of the Israeli Army. It was difficult but “difficult is easy, easy is difficult”, I used to choose difficult in my life. I received the Silver Bear for best actor from the hands of Gina Lollobrigida, the love of my childhood and youth. Tuncel Kurtiz