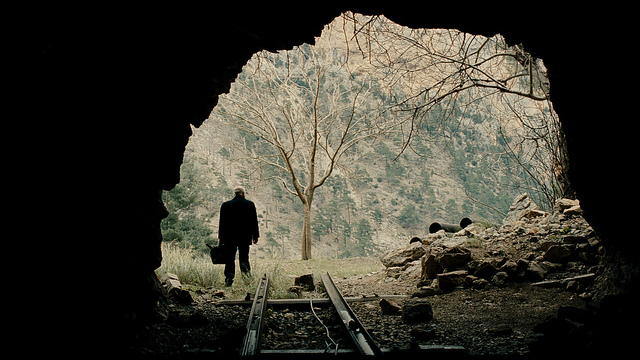 Though the story is simple, the emotions generated in Mold are anything but superficial. Ali Aydın’s debut adheres to new Turkish cinema stylizations, with long takes frequently lensed with a fixed camera, minimal dialogue and a regional setting - even the single-word title is becoming standard for the country’s arthouse output. Yet Mold is neither derivative nor slow in its depiction of a lonely father petitioning authorities for information on the son who disappeared 18 years earlier… Basri is a solitary railroad track inspector, trudging along the tracks day in, day out, to clear any blockages. At home, he’s visited by police inspector Murat who brings him in for questioning. The ensuing scene at headquarters, shot in a long stationary take, is riveting, as the steely, unmoving Murat grills Basri over the stream of letters he has written asking for information about his son, taken into custody nearly two decades earlier. The older man’s averted eyes and bowed head rarely meet the cop’s intense gaze, yet his submissive body language can’t disguise his doleful tenacity… The helmer couldn’t have found a better vessel than Kesal… Kesal’s Basri is the kind of nondescript man no one notices - whether glimpsed on the street or in a cafe, few would spend time wondering about his backstory. Making this poignant figure a source of sympathy and depth with a minimum of information is a significant achievement for both thesp and director. Jay Weissberg
Germany Turkey
'
2012
Director
Ali Aydin