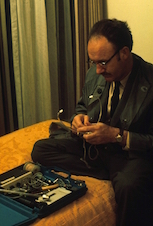 Coppola, who wrote and directed, considers this film his most personal project. He was working two years after the Watergate break-in, amid the ruins of the Vietnam effort, telling the story of a man who places too much reliance on high technology and has nightmares about his personal responsibility. Harry Caul (Gene Hackman) is a microcosm of America at that time: not a bad man, trying to do his job, haunted by a guilty conscience, feeling tarnished by his work.

The movie works on that moral level, and also as a taut, intelligent thriller. “The Conversation” comes from another time and place than today’s thrillers, which are so often simple-minded. This movie is a sadly observant character study, about a man who has removed himself from life, thinks he can observe it dispassionately at an electronic remove, and finds that all of his barriers are worthless. The cinematography is deliberately planned from a voyeuristic point of view; we are always looking but imperfectly seeing. Here is a man who seeks the truth, and it always remains hidden. He plays the conversation over and over, but does Mark say, “He’d kill us if he had the chance,” or “He’d kill us if he had the chance”?