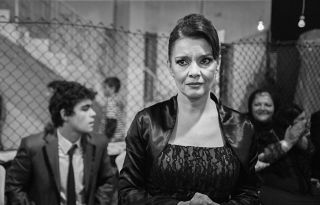 After her husband’s death, Nurcan is left with her grown-up daughter, Feride, and two school-age children, İlker and Özge. Nurcan married young, before developing her own personality, and was browbeaten by her jealous husband into becoming a weak, timid character unable to express herself as an individual. Aware of her mother’s inadequacies, Feride finds herself taking over as head of the family after the death of her father. But she already carries the burden of being the eldest child of a dysfunctional family and with this new responsibility, she becomes more and more diffident in the outside world. Seventeen-year-old İlker worshipped his father and is put out by his sister, a female, running the household. In reaction, he turns his back on the family and launches into an inappropriate affair with his best friend’s mother. As a teenager who needs her family more than ever, Özge can’t get through to either her mother or her sister. So she struggles to make herself remembered and to be a part of the family. Nobody’s Home is the story of four characters who fail to become ‘family’ again in the face of a loss and gradually destroy themselves in the process.
Turkey
'
2013
Director
Pure sea Edremit