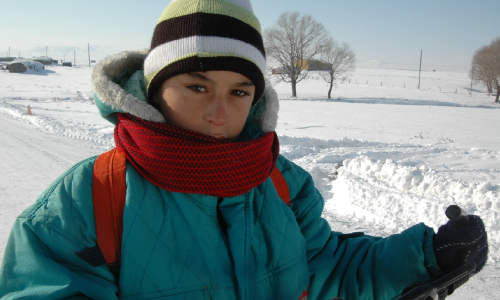 Omnibus of five short films that were shot in the Turkish province of Kars, on the border with Armenia. Among the five directors are three debutants who were chosen to film their stories after winning the Ankara Cinema Association’s 2007 screenplay competition. In Özcan Alper’s Moto Guzzi like the first hint of warmth and spring, a young love blooms on a lonely stretch of winter highway. A young woman returns home in Zehra Derya Koç’s Ashes and is confronted by childhood memories as painful as they are poignant. In Ülkü Oktay’s Zilo, an enterprising little girl and her somewhat less than enthused pet chicken hatch a scheme to make it to the big city. When a young student returns to his village for the funeral of his grandmother, he discovers a mystery about his family that he never knew in Ahu Öztürk’s Open Wound. The final film in the collection, Emre Akay’s A Small Truth, is a wonderfully absurd bit of imagined family history that recounts how a famous farmer came to deserve his nickname “The Athlete.” In each story, human idiosyncrasies, and an atmosphere that is specific and particular, yet oddly universal lingers. Whether it’s the love of a little girl for a chicken, the mortification that attends the onset of first menstruation, this lovely collection of short films is indicative of a fearsome amount of cinematic talent newly emergent in Turkey. Vancouver Film Festival