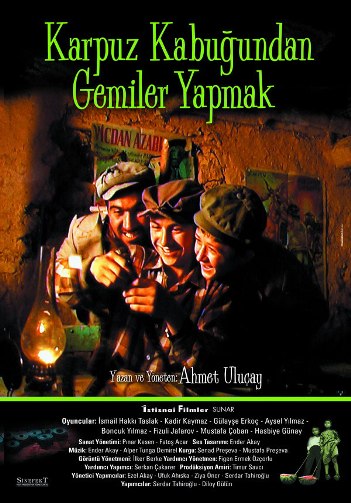 Boats Out Of Watermelon Rinds

Ahmet Uluçay is no new name to Turkish cinema. Known better among short film circles (the chance to shoot anything feature length always eluded him), the director has been winning awards for his short and documentary films since 1994. Uluçay's films are a medium for him to recount himself, what goes on around him, his fantasy world and the real world outside, using a language unique unto himself. Boats Out of Watermelon Rinds is set in the late 1960s in a town, the road between the town and a village, and the village itself. The village is where a couple of kids set out to realise their cinema ambitions. It is hard to say that the rural atmosphere, the village or the town presented in the film belong to a particular period. Observations of first love, images and relationships - whether between master and apprentice, two brothers, mother and son, or mother and daughter - are depicted with remarkable intensity and humanity. The real story is about what happens to two friends, Recep and Mehmet, during the summer holiday they spend apprenticing in the town. The film, an amalgamation of short stories that take place within the same timeframe, relates the kids' experiences with realism and humour. While Recep is unable to open up to Nihal, the girl he's fallen for in town, Nihal's sister begins to take an interest in Recep. Recep pours out his feelings for Nihal in a letter and his friend Mehmet offers to get the letter to Nihal. Recep brings village walnuts to his beloved and struggles to pick them up when they're strewn everywhere.. When his hair draws compliments, Recep goes to buy a comb and mirror. He's then forced to have his hair cut at the barbers, worse still by Mehmet.. Natural dialogue flows between the kids when they try to project the fragments of film they've taken from Aygül public cinema.. Recep's master acts sympathetically over the watermelon display he's working on.. His mother confiscates some of the film fragments... Images and stories of childh
Turkey
'
2004
Director
Ahmet Uluçay