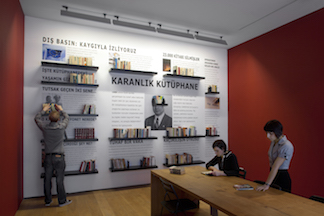 The mysterious story of 12 people who were kidnapped in September 1980 by unidentified people and held captive in a library for two years… March, one of the abductees, answers questions directed at him from behind the camera. The story of these 12 people, who have been assigned to find the subject headings given to them each day and erase them from books, is disrupted when March, who has been telling the story in English, suddenly begins to speak in Turkish. March’s memories of the library on the one hand and the discussion between March and Eğrikavuk on the other, make the video no longer just about the library, and shift its focus to stereotypical narratives attributed to the East.