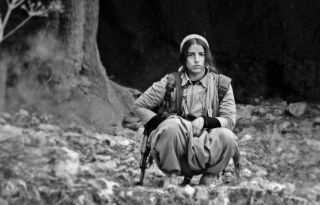 Jîn is a 17-year-old girl, determined to live, to participate in life no matter what it takes; and to this end she finds herself battling her way bravely through dark forests. The film opens with Jîn fleeing an armed organization in the mountains for an unknown reason. She spends solitary days in the mountains and forests hiding both from organization members and from security forces. Her aim is to get to the big city, to achieve her dreams of new and wider worlds unknown to her until now. Armed with a small but robust body and a fresh but powerful sense of resolve, she manages to create a space for herself in the dark and forbidding wilderness. She gets caught in crossfire and courageously dodges the bullets, she knows fear and cold, she finds things to eat. She shares a cave with a bear to escape a shelling, she finds an ally in a deer, she treats an injured donkey, she makes a pact with a savage bird whose egg she eats. Eventually, she lays her hands on some civilian clothing and makes her way down from the mountains. But for Jîn, the plains are more dangerous than the mountains, more threatening and more hurtful. No matter how hard she tries, how resolutely she struggles, she can’t break through the barricade closing in on her, and the world of her dreams remains elusive. he continues to take a battering both to her willowy frame and to the feelings and sensitivities inside. She returns, deeply disillusioned, to her solitary existence in the mountains and reaches out mournfully to the natural world. She finds herself caught once more between toppled trees and dismembered animals as the shells and bullets rain down. By now her sense of rebellion has turned to despair. Stuck in an impasse, Jin has no one but the trees and animals to nurse her wounded body and soul.
Turkey
'
2013
Director
Reha Erdem