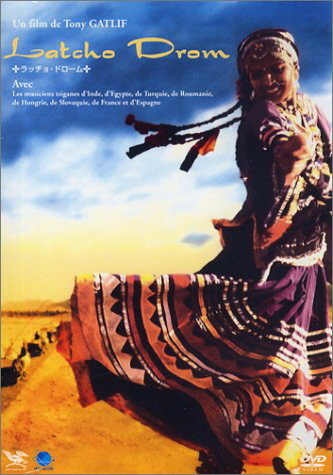 Latcho Drom opens with a caravan of Indian Gypsies, crossing the fairy-tale landscape of the orange Rajasthan desert and singing about their wandering fate. Himself a French citizen of Rom origin, Gatlif initiated Latcho Drom as part of a search for his roots. Although Gypsies have scarcely been ignored by the movies, few films have been made from a Rom perspective in the Romany language. For Gatlif, Latcho Drom is “neither a documentary nor a fictional film.” The filmmaker has called it a tone poem, and, more than anything else perhaps, it is an anthology of Gypsy music. Played on a variety of string instruments - sitars, zithers, violins, guitars - against means of percussion that range from small drums to brass vases to paired spoons to castanets to taps, the score is wailing and staccato. Music is placed at the center of Rom culture; Gatlif’s musicians are invariably watched bv a gaggle of admiring kids. Music also determines the movie’s structure. In the Rajasthan sequence, for example, Gatlif match-cuts to the beat, so that a young girl, dancing to amuse herself as the adults set up camp around her, is suddenly replaced by a nubile, bejeweled maid, whirling to the same music without missing a step.
France
'
1993
Director
Tony Gatlif