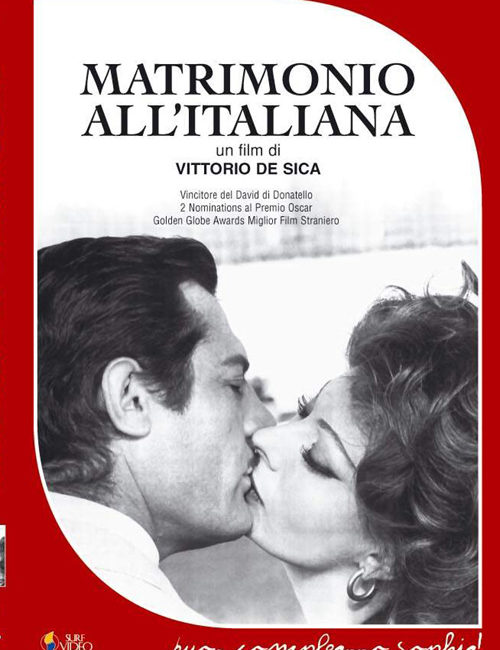 The dazzling results De Sica achieved with Yesterday, Today And Tomorrow, in terms of both box office and awards, presented him with a further chance to work with Loren and Mastroianni. Inspired by a story Eduardo De Filippo wrote in 1946 and later shot for the screen, De Sica made one of Italian cinema's most enduring and highly reputed films, Marriage, Italian Style. The title of the film was coined as a witty retort to Pietro Germi's Divorzio All'Italiana (Divorce, Italian Style) of a year earlier. Here was the tragicomic story of Filomena, a 17-year-old earning her life as a prostitute when she meets and moves in with Domenico. 22 years as his mistress and three children later, Filomena faces losing her man, when he sets his sights on marrying someone else. Her carefully contrived rebellion is a showdown between man and mistress. Despite a nomination as Best Foreign Film, the film came away empty-handed from the Oscars. In fact, besides a Golden Globe and an award for Loren at the Moscow Film Festival, it was the same story elsewhere. But the true awards took place at the box office, where resounding success made the film one of the most watched products of Italian cinema ever. The film's success was due, in particular, to Loren's extraordinary performance. The 29-year-old actress, cast in the lead role of Anna Magnani, made an entirely convincing 40-something-year-old woman and, according to De Sica, gave her lifetime best performance in the film. Add to this a thoroughly fitting soundtrack, Mastroianni's unfailing panache, exquisite attention to detail, scenes showcasing the technological innovations of the day (refrigerators, telephones, bar paraphernalia and the like) and a contemporary narrative never faltering in tempo, and here was a De Sica film that was destined to become one of Italian cinema's comedy classics. At this point, it's worth underlining the compatibility of Loren and Mastroianni, for the two shine more as two well-cast rather
France
'
1964
Director
Vittorio de Sica