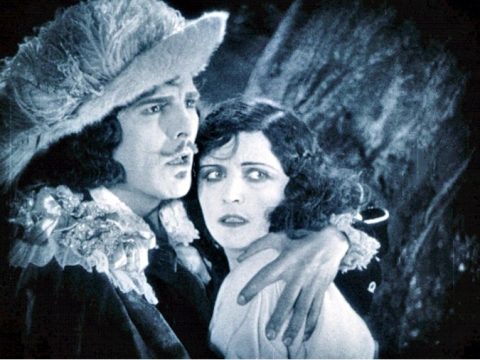 Adapted from Victor Hugo’s stage play, Ruy Blas, and reinterpreted as a comic opera by Adolphe d’Ennery with the music of Jules Massenet, this was a work that seemed destined for oblivion soon after it was first staged in 1872. For all that, at least ten film versions have been made of the story since 1915. Brenon’s The Spanish Dancer is set in the Spanish court of the early 17th century. When Don César de Bazan, a nobleman who owns little else than his title, falls foul of the king over his love for the gypsy girl, Maritana, he is thrown into jail and sentenced to death. But then the tricky Don Salluste and his cohorts intervene, troubled as they are by the influence of the king’s French wife, Isabella, and Cardinal Richelieu; and the various schemes hatched by this aristocratic cabal have consequences that not even they could have anticipated. The Spanish Dancer was one of the largest Hollywood productions of its day. The studio behind it,

Famous Players- Lasky (which was later to become Paramount Pictures), originally wanted to cast its biggest name, Rudolph Valentino, but this wasn’t to be. In the event, the studio decided to rewrite the story with gypsy girl Maritana rather than Don César as the main character and have Pola Negri, another big star recently shipped in from Europe, play the lead. The role of Don César then went to Antonio Moreno, a Spanish born actor who had moved to Hollywood at an early age and made a name for himself since. Born and raised in Poland, Pola Negri actually trained as a ballerina and was discovered on stage by filmmakers only later. Her dynamic performance and the professional acting of character actors such as Kathlyn Williams and Adolphe Menjou in secondary roles give the film an energy all of its own. Equally, both the film’s ambitious décor and costumes, and the carnival scenes with their hundreds of extras make this one of the foremost examples of the lavish productions that Hollywood studios were turning out towards the mid-1920s.

In the course of its restoration by the EYE Film Museum in 2012, it was discovered that the film shown until then was actually a version that had been edited down in the 1950s. On the basis of two Dutch and Russian language prints surviving from the 1920s, along with edited English and French language sources and a copy of the script found in the USA, the film was reassembled and returned to almost its original form when it was first released. In 2012, the fully restored picture premiered at a gala performance held to mark the opening of the new EYE Film Museum building. In the five years since, The Spanish Dancer has been watched innumerable times by festival audiences in France, the USA, the UK and Italy. The Festival on Wheels screening in Ankara will be its first in Turkey.