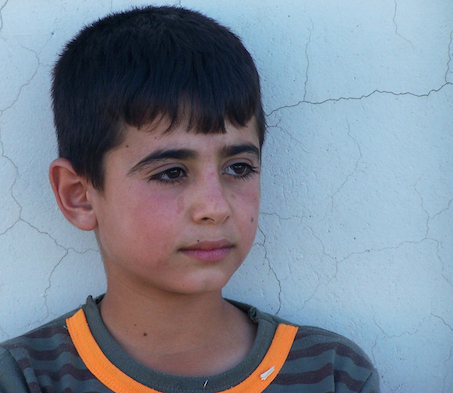 The First Movie, a title which may be a playful twist on Dennis Hopper’s 1971 cult classic The Last Movie, is part documentary, part essay, part contemporary memoir, recording Mark Cousins’s visit to Goptapa in the Kurdish region of northern Iraq, which was the subject of a horrendous chemical assault in 1988, part of Saddam Hussein’s genocidal assault upon the Kurds.

Cousins’s mission was to film the region and also to talk to the adults and the children there. But not just that. Cousins does not regard these children as the passive object of his camera lens: the exotic and mysterious bearers of innocence, which is how they are so often seen. On the contrary. He asks them to be discerning viewers and even makers of films. After settling them down to watch movies, he hands out some digital video cameras to the children and asks them to make their own films. The children come back with some remarkable stuff.

These are, as it happens, children who have never before seen a film – incredible as that seems to western content-consumers who hoover up films on their TVs and iPhones as soon as they can gurgle. And all this is interleaved with Cousins’s own thoughts about growing up himself in a war zone; Northern Ireland. He says that as meat is tenderised for being battered, so he believes that children need not be hardened by this – and that the life of the imagination is what is real, more real than war. This is a terrifically enjoyable and engaging film: open-minded and open-hearted, and utterly unlike the material on regular commercial release.

Festivals
20th Festival on Wheels
For the Love of Cinema!