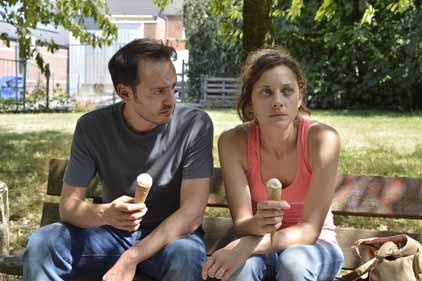 The latest assured gem from Jean-Pierre and Luc Dardenne recalls the work of their spiritual ancestor Robert Bresson in its rigorous examination of a simple moral dilemma. In a rural French town wracked by economic tough times, Sandra (Marion Cotillard) learns that, having just returned to her job at a solar panel manufacturing plant after a leave for clinical depression, she is now going to be laid off, because her sixteen co-workers have voted to fire her rather than lose their 1,000 euro bonuses. Nonetheless, Sandra fights back, convincing her bosses to hold a second, secret ballot on the issue after the weekend, and then visiting each of her co-workers in order to ask them, face to face, to let her keep her job. What follows is a series of encounters in which need and greed prove equally compelling reasons for people to vote in their own interest, all loomed over by the specter of capitalism’s uglier side.

The tension mounts as she struggles to maintain her own sanity and self-control while pleading with people to make a not-inconsiderable sacrifice for her sake. It’s a straightforward conceit that the directors capture via their trademark, formally assured framing and long takes, their static compositions and protracted tracking shots highlighting Sandra’s emotional condition (and relationship to those she visits) with piercing clarity and directness. Two Days, One Night is an ethical drama of quietly epic proportions.

Festivals
20th Festival on Wheels
Around the World