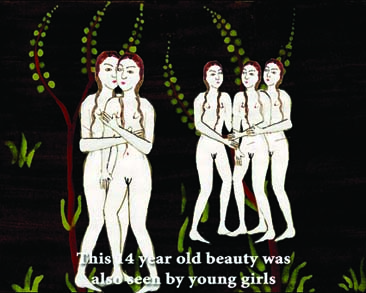 The storyline, loosely reminiscent of the double-layered structure of One Thousand and One Nights (always containing a story within a story), presents the tragic fate of Fadike, once the most beautiful girl in her Anatolian homeland who is striving for a modern lifestyle. In the course of events, though, she becomes an embittered adherent to old costumes that (in the person of her own mother) ruined her prospects and aspirations in the first place. The story is presented in eight parts, each based on a particular episode of Fadike’s life, visually anchored in hand-drawn animation but also drawing on other materials (photographs, collages, even painterly abstraction) during the animation process. As CANAN explains, the work is very much conceived as a “video-fable,” with herself assuming the role of the “ravi” (story-teller). The work not only questions the alleged ideological rupture of old, traditional, exotic and “other” versus new, modern, up-to-date, and “immanent”; it also points towards another way of thinking and discussing a contested issue (in this case forced marriage and everything that comes with it) as political. The potentiality of opening up the political arena, understood in a wider, more comprehensive sense, is shown to depend on the historic as well as aesthetic detours the work is willing to take. ‘No shortcuts to politics,’ “Exemplary” seems to—exemplarily—demonstrate. ‘No shortcuts to any easy solution either,’ one can legitimately add. While the “reality” of all those detours contributes crucially to the envisioned outcome, the becoming-political of matters cannot be considered properly political in the first place.