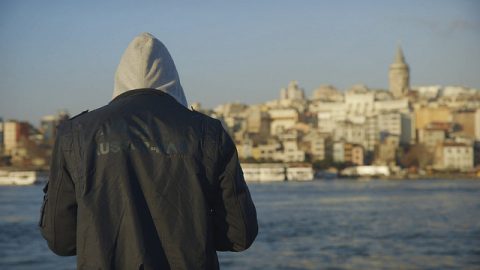 City of Ghosts chronicles the efforts of “Raqqa Is Being Slaughtered Silently” (RBSS), a handful of anonymous Syrian activists who risk their lives to tell the world about their city’s suffering. What begins as a group of young school friends reporting on the anti-Assad movement during the Arab Spring of 2012 takes on a new purpose when the Islamic State arrives in 2014. These citizen journalists film demonstrations in the city’s Freedom Square, the public executions of demonstrators that ensued, street after street bombed to rubble, and long lines of citizens lining up for meager rations. In this way, RBSS wages a meaningful opposition to ISIS’s own media campaign of intimidation and propaganda (including that aimed at children). When one member of the group is captured and executed, along with his father, the remaining guerrilla reporters begin leaving, mostly for Turkey, and later for Berlin. Heineman meets them there, documenting with remarkable insight and intimacy their ongoing operations, the courage that sustains them, and the threat that follows them wherever they go in what is arguably the defining documentary about Syria to date.

City of Ghosts is one of the five films shortlisted by Indiewire for Documentary Oscars 2018.