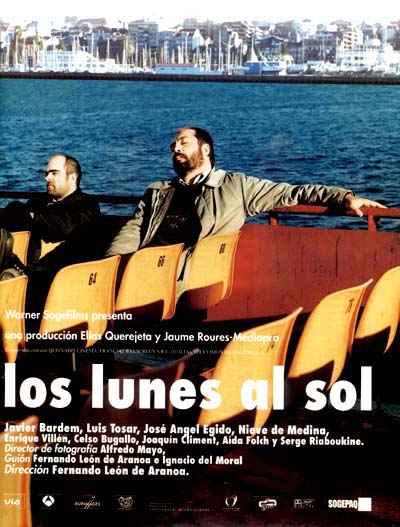 Mondays In The Sun

They daily trudge the hills of temporary work, employment lines, waiting rooms. They know the application forms of fear, because they fill them in every day. The map which they are following is false, they've suspected this for some time, although no one has said anything. We know of their daily survival, their stubbornness, we know of their daily, monthly courage, their tenacity. This is their story. The story of a present which, for lack of horizons, seems more like the past, that of a group of unemployed men, the collateral damage in a global economy which looks for quick results, who walk the alleyways of the system, looking for life's emergency exits. They'd like to stop the clocks for a moment, make an inventory of doubts, of mistakes, they'd like to go back to the place where they took the wrong turning, to start again, to have known then what they know now. Every day they tell themselves that it's all going to change, tomorrow, the day after, next month. For once, let them be the protagonists, those people who until now have only figured in neighborhood incidents, small local columns. Those who live in the neighborhoods, those who read about life in magazines, those who have problems getting to the end of the month, those who have problems starting it. Our stories, our films, our hopes should talk about them. And our fiction should be theirs, slices of life, moments. Let their strength, their convictions, their momentary weaknesses move us. Fernando León de Aranoa
France Spain Italy
'
2002
Director
Fernando Leon de Aranoa