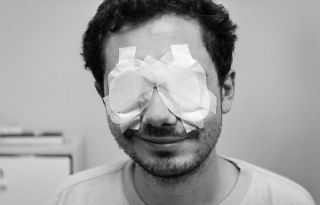 This film is based on the real life of Melik Saracoglu, one of the directors of the film. M, a young cinephile from Istanbul, has a joyful student life filled with books and films in Lyon, France where he studies cinema. Although he lost his right eye in high school, he continues to dedicate his life to cinema until one day when his life has to change drastically. Recognizing that his functioning left eye is also encountering a retinal detachment, he immediately flies to his hometown, Istanbul, where he will be operated on by his ophthalmologist. The slowly passing recovery period is interrupted by a second retinal detachment, which terrifies M., his family and all of his friends. The risk of blindness grows stronger threatening to devastate M.’s hopes and dreams. He is forced to reconsider his being, his life and his passion for cinema during the difficult and painful recovery period which will last 40 days. During these bed-ridden days, he is obliged to lie face down with both eyes closed. The suffering he endures during this “rehearsal of blindness” will be the ultimate scene where he must face his own fears and examine his patience.
France Turkey
'
2013
Director
Malik Saracoglu