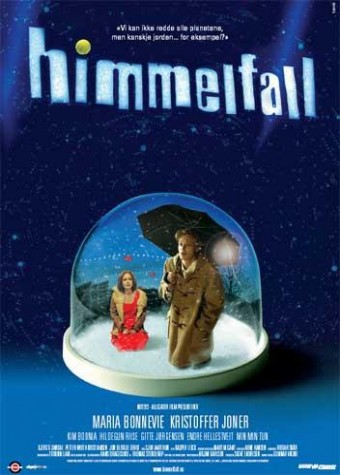 We can't save all the planets, but maybe Earth for example? It is three days before Christmas at Sollihogda Psychiatric Hospital and Reidar expects to get hit in the head by a meteor. He wants to save the entire world from this disaster, but most of all he wants to save Juni, but Juni is not so sure she wants to be saved. A blackly comic criss-crosser, centered on various inmates of a psychiatric hospital, Falling Sky is sharp, touching and thoroughly entertaining. The central character is Reidar, an inmate of an Oslo institution. During the holiday period, he is due to celebrate with his elderly and senile mother. Another inmate is suicidal Juni, with whom Reidar is in love but who has a habit of slugging anyone who comes near her. Reidar refuses to give up hope, maybe a fist on the nose can also be considered as a kind of caress? Juni's parents come visiting, but tell her they are going abroad to celebrate Christmas without her. The film is unpredictable and often surprising in its developments, but never loses sight of its core black humour even in the warmer moments. First-time feature helmer Gunnar Vikene smoothly moves between the different story threads, gradually revealing how all the characters are in some way connected with each other. Despite the trim running time, the viewer gets to know these people and root for them.
Norway
'
2002
Director
Gunnar Vikene