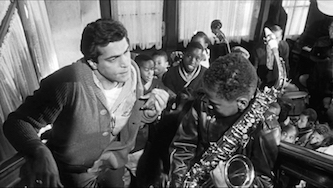 The success of John Cassavetes’s independent Shadows led to a contract with Paramount that yielded only this 1960 feature, Cassavetes’s second—a gauche but sincere drama with a highly relevant subject: the self-laceration and other forms of emotional havoc brought about when a footloose jazz musician (Bobby Darin) decides to sell out and go commercial. A lot could be (and was) said about what’s wrong with this picture: it’s pretentious, lugubrious, mawkish, and full of both naivete and macho bluster. It also has moments that are indelible and heartbreaking, at least one unforgettable performance (Everett Chambers as the hero’s manager), and many very touching ones (by Darin, Stella Stevens, Rupert Crosse, Vince Edwards, Cliff Carnell, and Seymour Cassel, among others), not to mention a highly affecting jazz score featuring Benny Carter and a haunting theme by David Raksin.