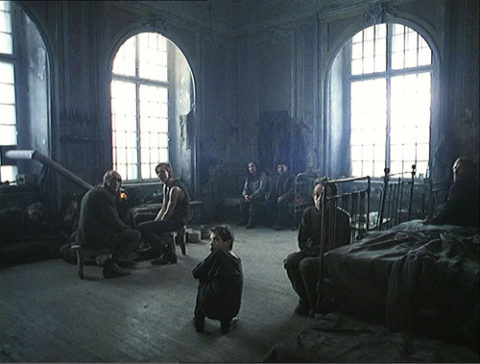 Like its predecessor Few of Us, Lithuanian cult film director Sharunas Bartas’ The House is highly abstract and nearly silent but for a pair of narrators. Whereas the first film was primarly centered on life in a remote mountain village in Lithuania and had loose plot, this one pays tribute to a huge, and aging lakeside manor and is plotless. The narrators speak to an unseen mother and the house may or may not be the fantasy or dream of one of its many diverse residents. For much of the film’s two hour running time, these inhabitants, who reflect people of varying races, shapes sizes, degrees of attractiveness and ages, are seen aimlessly wandering about, looking sad and exhausted. Sometimes, some of the prettier female residents will doff their clothing. Meal times are particularly morose as no one speaks or pays each other any mind at all. It is only toward the end of the film that anything substantial occurs. It happens during a masked ball and is a commentary on the Soviet takeover of Lithuania and a heartfelt prayer for the preservation of Lithuanian local cultures. While there is not much of interest in the story, the beautiful cinematography, which utilized a palette of pale colors and natural lighting and employed largely stationary imagery punctuated by the occasional slow tracking shot, helps maintain viewer interest.