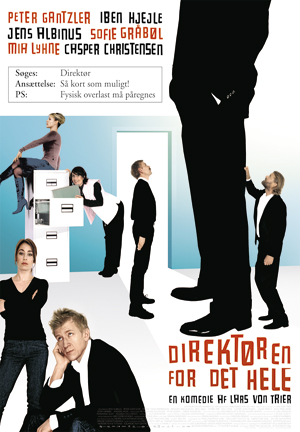 Boss Of It All, The

With the low-budget comedy The Boss of It All, Lars von Trier takes a break from the international casts, bare-stage aesthetic and the self-described “sermonizing” of his past two features, Manderlay and Dogville. Lars von Trier has set his film among the staff of an information technology company where boss Ravn has spent years hiding behind a fictitious company president who takes the blame for all the unpopular decisions whilst he retains the love and loyalty of his six key staff. When he decides to sell the company, the potential buyer insists on meeting the president or “boss of it all”. Unemployed actor Kristoffer is hired to play the part and given power of attorney. He approaches the task with earnestness and commitment. This isn’t just a job, it is a role that he must inhabit and play to the full. Asked to continue the deception over the course of a week, he meets the staff and becomes morally involved in their future and guilty about his part in Ravn’s great deception. Lars von Trier takes a satirical look at his own country and The Boss Of It All is a terrific absurdist satire about office hierarchies.