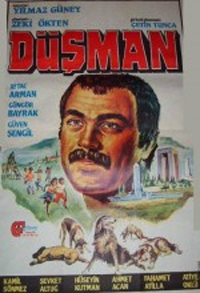 Enemy is the product of the second co-operation of Yılmaz Güney, the man in gaol, with Zeki Ökten after The Herd, but it's much different from The Herd, where an epic narration filled with violence dominates. A film comprising all the whirlpools of a quiet, peaceful, maybe sometimes monotonous life in all its aspects. The very essence of life itself, of what is lived through. This is the life of İsmail, an unemployed man, and his wife Naciye, who aims much farther than her shanty of a house with only one room. In this drama of a marriage disrupted by unemployment plus poverty and destitution which are its natural results; in this adventure where small people are broken into crumbs and get destroyed when faced with all kinds of exploitation; the conflicts of father with son, brother with brother, and friend with foe are narrated in line with every moment of that which has been experienced in reality. The porter markets where unemployment is shamessly marketed, the cockfight at the cemetery of war heroes, the homesickness of those who have bidden farewell to their native lands, revelries organised in honour of Germans, massacre of animals and the struggle of İsmail's wife Naciye who tries to bore a hole in poverty through the lives of the actresses whom she covets and the posters of whom she hangs on the walls of her house. Many stories, many anectodes have come together, just as in life itself. Enemy, a singular film which underlines in black the fact that unemployment and poverty is not destiny, resembles a documentary on small people who haven't had the chance to get any sort of hold on life. Burçak Evren
Turkey
'
1979
Director
Zeki Ökten