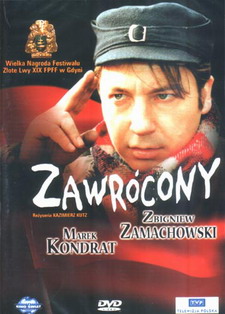 A political comedy by one of Polish cinema’s classic directors. The Converted is set in an industrial mining town in 1981. Tomazs is a young man without political conscience. He lives with his wife and his day-to-day life following a set routine. His existence becomes threatened when, as a party member, he is dispatched by his superiors to a Solidarity demonstration to inform on the participants. Carried away by the patriotic fervor of the meeting, Tomazs starts singing banned songs along with the crowd. Arrested by the militia- in a hilarious and lengthy chase scene, reminiscent of silent comedies- he is taken away, ridiculed and forced to identify other people on the demonstration. Realizing that he had been sold a lie, Tomazs joins the demonstrators in a local church and exacts revenge on one of the militiamen. With a superb performance by Zbigniew Zamachowski, who started in Kieslowski’s Three Colours:White, The Converted is not only an absorbing and refreshing new take on the state of Poland and its recent troubled past, but also an amusing political satire.