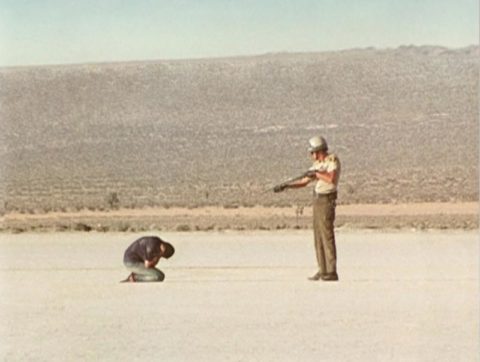 Punishment Park is a little seen but much discussed trailblazer of the ‘pseudo-documentary’ genre which uses a documentary style to present fiction as reality, the film’s cult status owes as much to its political daring as to its pioneering spirit. Unable to find a North American distributor after screening at the new York Film festival, the film comes across as a ‘product-of-fantasy’ record of the clash of views in America at the time, whether pro- administration or anti- a clash that applies in both the intellectual and barbaric sense. In the film, a group of citizens judged by the government to be betraying their country are detained at a centre in the Californian desert. The group includes The Black Panther sympathizers, communists, feminists and even idlers who reject the principle of labor. Each of the detainees appears before a tribunal made up of conservative citizens. Although Peter Watkins set out with a quite meticulously structured script, as shooting progressed he gave increasingly free rein to his amateur cast to improvise. Throughout the film we are witness to fierce and fluent discussions of political freedom. The police offer the detainees two lternatives: either to be prisoned for years on end, or to spend a few days in ‘punishment park’ and make their way, without water, to an American flag in the middle of the desert. Punishment Park represents a convincing world that is given credibility by its rofound arguments, ‘documentary style’ washed-out colours and hand-held camera work; this is reinforced by a complex approach to sound and picture editing which means the two are sometimes out of synch. Watkins’s film is an act of provocation designed to make audiences think about real events, the horror of what is possible and the security dilemmas implicit in the relationship between citizens and the state. Yeşim Tabak