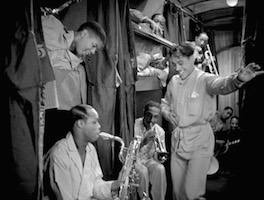 Cab Calloway is deep in sleep on a night train from Chicago when a telegram arrives from Irving Mills, asking him to change the opening number of the next day’s performance at New York’s Cotton Club. The leader wakes up the band and a jam session in pyjamas kicks off, with the band members recreating the sound of a train in motion. Upon arriving in New York, Calloway recommends to the coach attendant that he buys a radio, to keep his wife “entertained” while he is at work. When the attendant acquires the radio which promises to “bring the leading radio artists into your home”, to his dismay it literally brings a seducing Cab Calloway into his home, but only when he is away and she feels lonesome!