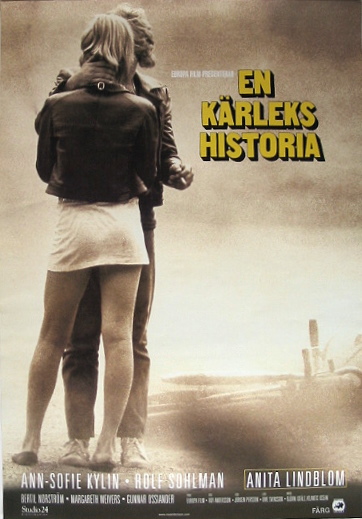 We know the Swedish director Roy Andersson from Songs from the Second Floor, winner of the Jury Prize in last year's Cannes Film Festival. A Swedish Love Story is his first feature film, which was a favourite to win the Golden Bear in Berlin in 1970. In this film, Andersson focuses in the innocent love experienced by teenagers. As he tells the story of Per and Annica, he also offers a sharp and plain portrait of adolescence. Per looks in the mirror, puts on his leather jacket and hits the road on a scooter while Annica lives with her aunt. Coming from radically different backgrounds, they find each other in the miserable crowd of the big city. They experience all the anxieties that come with their age. Slowly, they learn how to know each other better. While the inflation of words found in the adult world does not seem to solve problems of communication, we watch Per and Annica slowly immerse into this world although they do enjoy the natural happiness of adolescence. Andersson's close-ups try to capture those moments when words are useless and it is the light of these frames that makes his language a magical but natural one. The misery surrounding the young couple underlines the difficulty of maintaining one's innocence. Against all odds, both follow the magical adventure they embark upon to its limits. Andersson's film is an ode to Per and Annica's love, a love that is free from the prejudice that accompanies adulthood. We can't help finding a part of ourselves in this beautiful story. Övül Durmuşoğlu
Sweden
'
1970
Director
Roy Andersson