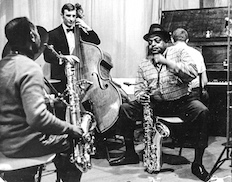 An intimate, curious portrait of American ex-pat tenor saxophonist Ben Webster, shot between March and June 1967 in Amsterdam, where he eventually died in 1972. Though the title suggests outright praise, van der Keuken goes deeper into Webster’s sound and character by creating visual metaphors (a conversation about the blues cuts to a shot of a knife), relating anecdotes and giving a brief history of the man. Toying with the possibilities of the interplay between sound and image, the film treats Webster as one of the architects of tenor sax by visiting a saxophone factory, where industrial noise subsides allowing us to hear Webster’s luscious vibrato sound. Treated with warmth and respect, this former member of Duke Ellington’s band is seen doing various activities such as cooking, talking to his hospitable landlady, shooting pool and using his 8mm camera. When, later on, van der Keuken incorporates excerpts from what are presumably Webster’s films, jazz and cinema seem even more interwoven than first assumed.