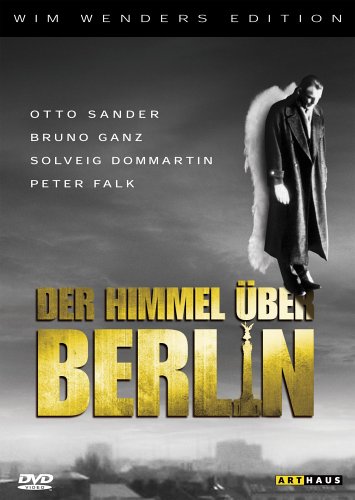 I've seen all the films Fritz Lang made in America - technically the best films he ever made. But it was horrific seeing the kind of things he'd had to consent to, how he'd conformed and lost his character.. (Wim Wenders). Ironically, though, Wenders was to repeat the Lang experience 50 years later: transferring to the US at Coppola's invitation, he turned out a string of films far removed from his earlier style. But on return to Germany, he changed his style once more and made the impressive work, Der Himmel Über Berlin (Wings of Desire). The film seemed to belong to the symphonic narratives of European cities, which cinema produced before the 1960s. In a sense, Wenders really does create a Berlin symphony in the film. He presents us with masterful monologues co-written with Peter Handke, aerial shots of Berlin and, instead of a specific storyline, takes us on a tour of the private world of myriad mortals. The net effect recalls a Berlin symphony. Wings of Desire marked Wenders' return to his career in Germany and with it a return to his original themes after a 10-year interlude. Rock, unconventional characters, the generation of 1968, nostalgic yearnings, personal quests, personal passions and incompatibility.. Years later, he was making something like a sequel to these earlier films. The central characters in Wings of Desire are two angels. One of them longs to be human with all the passions, emotions and mortality that implies. In a sense, the angel is also on the lookout for love. Wings of Desire interweaves the cinema aesthetic with a powerful literary current. Tracking shots, music and shifting personalities play a significant role, in addition to which Berlin emerges as a character in its own right. Images of the city's devastation in the aftermath of World War II unfold before us to give a palpable sense of Berlin history. The nostalgic cravings of the narrator turn the city's character with its accent on the past into living history. Having taken y
Germany
'
1987
Director
Wim Wenders