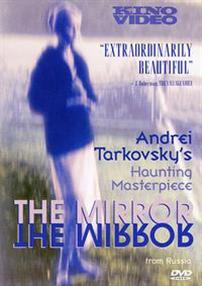 One of the cinema's supreme visual poets, Andrei Tarkovski's The Mirror is a hypnotic and fragmented series of images focusing on the director's childhood intermingled with shards of his adult life, a child's wartime exile, a mother's experience with political terror, the breakup of a marriage and life in a country home. These are interspersed with slow-motion dream sequences (heavy on women with luxurious brown hair and water motifs) and chunks of grim news reels. Although his movies are relentlessly undramatic and often vaguely unframed, the power of his camera is so lyrical as to extend the cinema into a new dimension. At times, Tarkovski is sensual - the mere turning of the pages of an elaborate art book can be a tactile experience. At other times, the screen is engulfed with deeply lyrical visions - embers burn, lights flicker, trees waver, women levitate - all in an enrapturing halo of trancelike beauty. The Mirror has been called an essential introduction, a puzzle which provides the key to this vivid filmmaker's other works, including Solaris and Nostalghia. For those viewers patient enough to sample artistry of a very un-Hollywood sort, this is a seductively ripe journey through time and memory.
Russia
'
1974
Director
Andrei Tarkovski