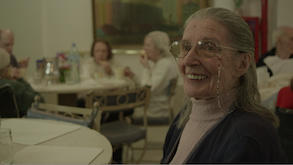 “I was thirty-five years old when I came across an autobiography titled “Laura Bonaparte. A Mother of Plaza de Mayo Against Oblivion.” She was my grandmother and I knew her deeply, but that didn’t stop me from reading it. That is how I met another Laura, a different woman. It seems to me that the book is divided in two parts: the first is about her childhood and told entirely as if it were a novel, a life that my grandma never told me about. From her childhood, she only talked about the Paraná river, the river where she learned how to swim.

The second part of the book begins with the disappearance of her children and ex-husband, in other words, the Laura I knew: psychologist, social activist, member of Mothers of Plaza de Mayo. By the time I read the book, she had been developing senile dementia for the past few years, and I felt that her memory was also fragmented.

I wanted to make a documentary about life’s paradoxes: how could a woman who spent thirty-five years of her life devoted to the preservation of a country’s memory, to preventing the forgetfulness that is frequent condition in the history of societies, suffer from an ailment such as the loss of memory? Was it fair for Laura to suffer from such a disease?”