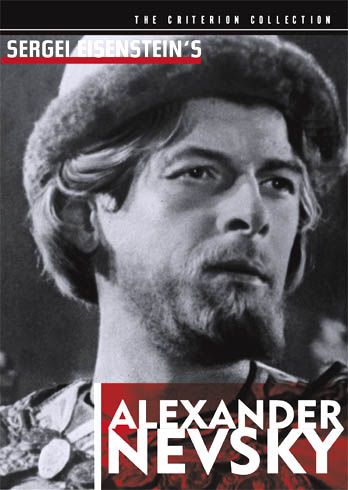 Sergei Eisenstein’s classic tale of 13th century Russia is as magnificent today as it must have been in 1938. One of te greatest achievements of Soviet and world cinema, this epic concerns the trying period when Russia was invaded by Teutonic knights on one front and Tartars on the other. As a result, the motherland is plundered, and the morale of the people crumbles in their struggle against the oppressors. A valiant and intelligent nobleman, Nevsky forms his army, then wins a decisive battle at frozen Lake Peipus in 1242. Eisenstein had the Russian army at his disposal, and the battle scenes, populated with thousands of men, are overwhelming. Wearing terrifying helmets fashioned after gargoyles, ogress and fierce animals, the Teutnic knights engage the Russian army of peasants and nobles, hacking with sword, spear and axe until the armor-burderned invaders fall victim to the lake’s cracking ice. Eisenstein’s attention to detail is meticulous down to the last horse blanket and homemade shoe, and the mounting of his monument to Russia’s ancient hero is superb.