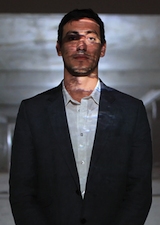 A video and performance artist internationally recognized for his work, Köken Ergun left this year’s Berlin Film Festival with an award for his documentary short, Ashura. At the 19th Festival on Wheels, audiences are promised Turkey’s first retrospective of Ergun’s video art, which has previously screened at the Oberhausen, Rotterdam, Sydney and Zagreb Film Festivals.

Among the video pieces on offer in this section are Binibining Promised Land, TANK LOVE, I, Soldier, Untitled, WEDDING and The Flag, which won Best Short Film at the Rotterdam Film Festival in 2007, as well as the eagerly anticipated Ashura. Ergun will himself be a guest of the Festival, and residents of, or visitors to Ankara will have a further chance to explore his work in an exhibition at the SALT Ulus. The show will open in Ankara on 5th December.