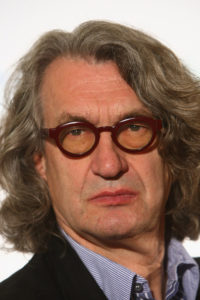 The first thing that everyone says about him is that he belongs to the “new German cinema”; the second is that he has mastered very well afilm language oriented toward the American cinema. The lightning-quick career he’s made, the rapidity of his recognition, is due to his ability to couple his films to various highly contemporary trends. He has supplied the audience with what it already knows and likes – American pictures. To young goers he offers pretentious attitudes and restless, empty human figures, full of doubt; to post-industrial society sad and pretty films without social or political significance, a kind of film that reaches the eyes and the heart without disturbing the mind.

The films of Wenders live by static, perfectly composed, arresting, and strong imagery. The story of a film plays no important role for him.

Thus Wim Wenders, both to his advantage and his detriment, belongs to the modern film, to cinema at the end of the seventies. He is the typical representative of filmmakers who find their creative inspiration not in reality, but ultimately in the cinema itself. His world had been the old Hollywood films, where he learned to compose his images: he doesn’t shoot everything that comes in front of his camera, but only those snippets of reality that correspond with something in his film memory.

After the foundations of his fimmaking were laid, and having received remarkably rapid recognitions, Wenders sought to advance his career in the US. and was invited by Francis Ford Coppola to make a film at Zeotrope studio. Thus began a painful time for Wenders, a series of disillusioning experiences, which he immediately knew to note down, and later, with his own resources,used to make “Der Stand der Dinge”: a film about the realisations of a filmmaker who is forced to give up his belief in the magic film land of America. The sincerity we feel in the truthful experiences worked out in the film brought Wenders the Golden Lion at Venice in 1982, a confirmation of his European identify as an artist.